For those of us who were young in the 60’s and 70’s the names; Vietnam, NLF, Saigon, Hanoi all symbolized what we believed in. It was the big, bad USA oppressing a small but proud people. It was David’s fight against Goliath. 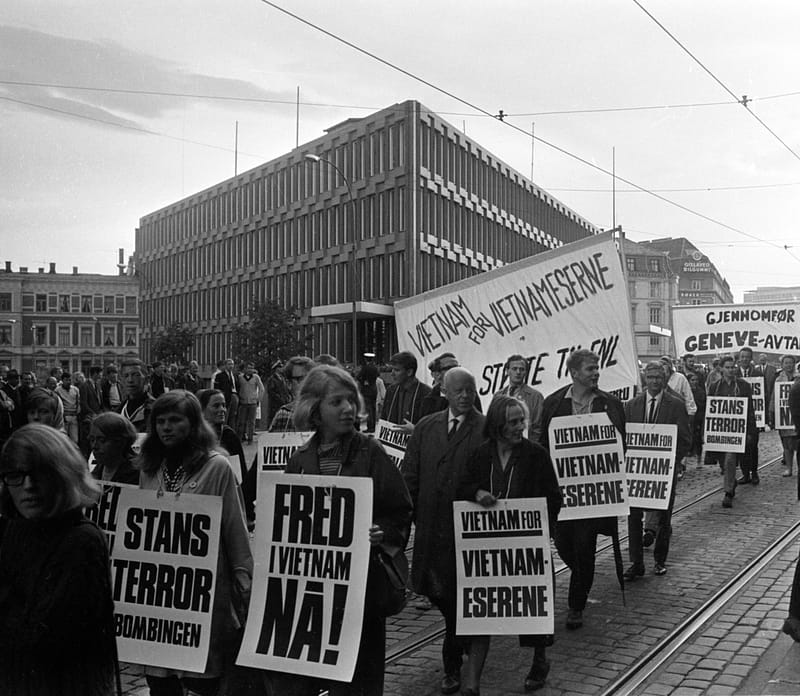 We marched and shouted slogans, we sacrificed our sleep to hoist the North-Vietnamese flag in the schoolyard – we were willing to bleed for the suppressed.

But, from the distance of time, what did really happen? What was life like for those who lived through it? The war has been described as a turning point in western history, but what about the Vietnamese themselves, what is their story?

We marched and shouted slogans, we sacrificed our sleep to hoist the North-Vietnamese flag in the schoolyard – we were willing to bleed for the suppressed.

But, from the distance of time, what did really happen? What was life like for those who lived through it? The war has been described as a turning point in western history, but what about the Vietnamese themselves, what is their story?

Saigon in June can be quite a challenge to a northerner. Temperatures around 40°C in the shade and humidity close to 100% seriously limits the level of activity.  An airconditioned hotel room seems like the only way to survive. Through the window I can see the Saigon river hardly bothering to move. The brown muddy water floats like molasses to the sea. 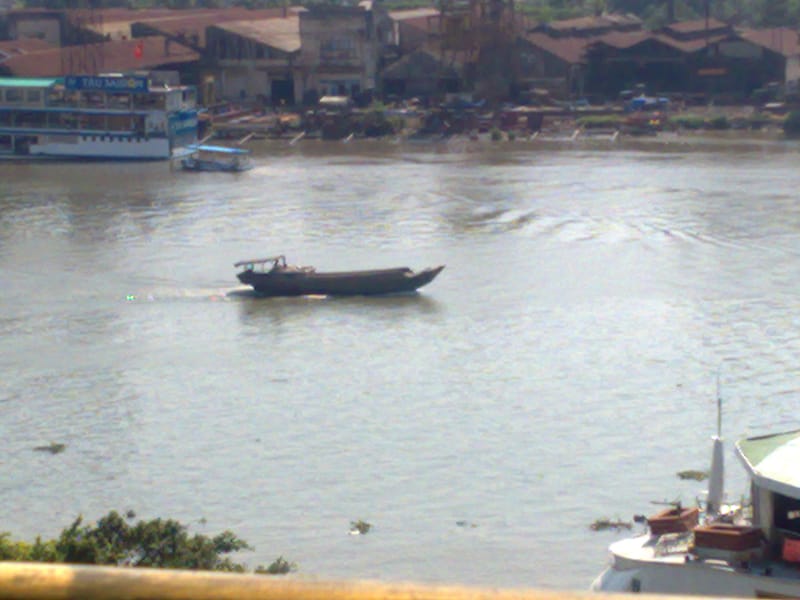 My Norwegian guide book tells me that the official name of the city now is Ho Chi Mihn city or Thàn Phô Hô Chi Mihn. Its residents obviously haven’t discovered that yet so they still call it Sài Gôn. Strictly speaking Saigon is the name of the city’s 1st district but nobody seems to make that distinction.

It is not until after dark and the temperature has dropped that it is possible to venture out. That is also the time when Saigon gets busy. The towns night market, Ben Tahn, is in the city centre and can be an exciting adventure in itself. It’s hustle and bustle everywhere it’s crowded with people, Vietnamese and tourists alike.

Sitting on the edge of the market with a cold beer in front of me I am leafing disinterestedly through my Norwegian Guide Book. I hardly notice the man who sits down beside me until he turns to me and say:

-What part of Norway are you from?

-I’ve lived in Norway close to 25 years he says as he sees my astonished face, but now I’ve moved back home. Norway is far too cold.

-Tahn, he says and stretch out his hand, my name is Tahn.

-Jan, I say and take his hand

-Are you on vacation?

-Well, yes in a way. I’ve come to learn a little about life in Vietnam and maybe write about for a magazine. You know, Norwegians used to be quite engaged in the anti-war movement. We romanticized a lot about it.

-I lived through, he says and it was very far from romantic.

We sit talking for a long time that night, all until the dawn starts to break and the streets are almost deserted.

-What are your plans, he says as we are getting up to leave, are you just staying in Saigon?

-No, I’ve thought of getting out of town tomorrow, out towards the coast. I have hired a car that I am picking up in the morning.

-I’ll be going to my hometown tomorrow to visit my wife’s grave. It is close to Phan Thiet and you’re welcome to come with me if you like. That is if you don’t have any other plans.

I had no other or better plans and so the next morning we headed out of Saigon towards the coast.

-I was a teacher, Than says, I taught English at a school here in Saigon until the communists took over in 75. I also worked as an interpreter for the Americans and when they left, life became hard to put it mildly. Together with my family I moved back to my home village, it is called Mui Ne. We were spared of the worst reprisals but life was hard. We had to spend all our time trying to find food – to survive. Not until I came to Norway did I have the time and distance to really think about what had happened and the war had been all about

-For us it was simple; Big, bad America trampling on a peaceful people.

– That’s not what it was like in Saigon or all over the south. It was a choice between two evils. It was either the corrupt regime of the generals who were just out to grab as much of the dollars the Americans poured in as they possibly could for themselves while the communists of the north wanted the whole country to march to their beat. Then when the Americans finally left the whole South Vietnamese army disintegrated there was total anarchy. It was a period of great cruelty and hardship. We did not see so much of it in our little village but we heard some grotesque stories.

-What puzzles me is how such a small country can defeat the world’s biggest war machine.

-Imagine two boys fighting. One large and one small. The small one refuses to surrender or give up no matter how much pain is inflicted, then the big one has only two ways out, he must either kill the smaller one or he must leave with his tail between his legs.

For each North Vietnamese soldier killed a new one would be sent, but for every civilian peasant, woman or child, killed the Vietcong would have 10 new soldiers. This the Americans did not understand until it was too late. They were stuck in world war 2 thinking. The only way they could have won this war would have been to wipe out the whole Vietnamese population and they couldn’t do that though they tried hard.

It took a long time and a lot of blood for them to realize that.

To drive from Saigon to Phan Thiet is a 200 km drive but it takes up to 5 hours. Traffic is a true chaos and there is a saying that; the Vietnamese are right side drivers but not fanatically so!

Road signs, to the extent that there are any, are obviously just for decorational purpose and the car horn is used to inform others of one’s presence.

Strangely enough there is very little aggression, no clenched fists, no raised finger.

-We are peaceful people, Than says, leave us alone and we’ll bother nobody. Just like a serpent if you leave it alone it will not attack you, but if you step on it……

The suddenly he changes the subject:

-The tourists are taking over the country now, the capitalists are back, hotels and bars and restaurants are being built everywhere. The young don’t want to take up the old ways of living, they will rather work in the bars and clubs and supermarkets. They will rather watch stupid TV series than to learn how to fish. I don’t like what is happening. Our family and ancestors are very important to us. If we don’t live in harmony with our closest relatives both living and dead, our culture will disappear just like it has done in your western world. If you give too much power to the rich this is what always happens.

In the short term a more comfortable life but …..

There is an old saying that if you give a man a fish he will live for a day but if you teach him how to fish he can live forever.

The same evening, we go for a walk in the town of Phan Thiet.

-I can show you some contrasts, and there are many of them. We still live big parts of our lives outdoors, with family and friends and neighbours. 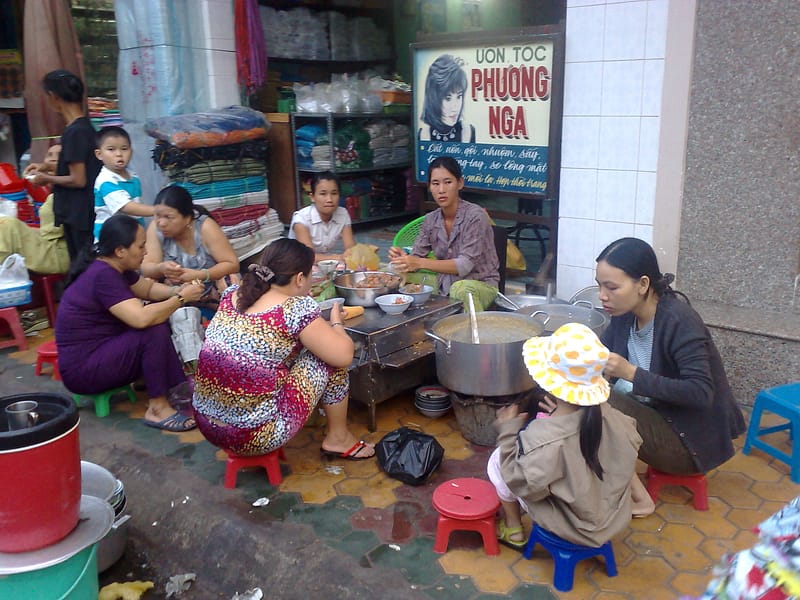 Everywhere there are friendly, smiling faces. It is hard to believe that this was the people that the mightiest war machine could not defeat.

-We are free people, especially here in the south, up north it’s a little different, but here independence is a very important aspect of life. Still the community is the very basis of our society.

-At the same time, we feel sorry for the tourists who come here and throw their money around. What is really important in life money can’t buy you; togetherness, friendship and peace of mind.

On the last evening of my stay in Mui Ne we sit and look out over the ocean where the sun is setting and reflects the peace and harmony that obviously is in the people here too.

-I think, Than says, that through MacDonald’s, Coca Cola and all their friends the Americans will achieve that which their military couldn’t. Their weapons are the dreams of the young, their dreams for the future. This is an enemy that we cannot defeat, because this is an invisible enemy. Life is not as easy as we see on TV and it shouldn’t be, but how are we to make young people see that? They feel that they get what they want.

– I am an old man now and I don’t have much longer to live. I just want to be here and care for my dead relatives and to tend to my wife’s grave. I shall mourn my lost years. My only sorrow is that no one will watch over my grave when I die. My children have remained in Norway and do not hold on to the old traditions. My brothers are gone, I am the only one left. This is the way it is and there is nothing I can do about it.

The next morning, I leave for Saigon. The last thing Than said before I left was that if I was to write about our trip, I must promise to change his name and not to use the pictures I took of him.

-It would only give my children a bad conscience if they read it and what good would that do?

Maybe he was right, Than, maybe it is important to know where you come from? After all his culture has survived for two thousand years while our consumer culture a mere 150 years. And still we believe that we are the holders of the truth…….?