After several trips to The Canary Islands, it is my view that Masca, Tenerife is one of the most remarkable places to visit.

It is located in the north- western corner of the island and it clings to the mountain side like an eagles nest. The views from Masca are breath taking and jaw dropping.

The ride up from Los Gigantes includes a bus ride up the steep mountain side to Santiago del Teide, a place worth a visit in itself. But it is when you leave Santiago that the real fun begins.  The hairpin bends down the steep cliffs gives a new meaning to “winding road”! The relatively short bus has to manoeuvre back and forth two or three times just to make it through the sharpest turns. Then in addition there is the challenge of meeting anxious drivers in rental cars who are not willing to approach the outer edges of the roads. Add to that the fact that the guides are more than willing to tell you about all the near accidents of the past.

We were lucky to go to Masca with a company called Sun Holidays and they supplied a competent driver so we got there without a single worry, just with a sense of awe at the landscape.

On the way there was a short stop in Santiago del Teide for supplies and to pick up our trekking guide, a young German/Swedish woman named Andrea who turned out to be a true gem as guides go.

There are lots of people in cars and buses going up through Masca just for the scenery ontheir way to the northern coast of Tenerife. But we had something different in mind:

We had decided to do the MASCA-TREK which, it turned out, can be a challenge for older legs.

Despite the many warnings we were ready to go, somewhat calmed by Andreas assurance that if, in the first ten minutes we felt that it would too much for us we could always return to the top. There the buses would be on stand-by until they were told that nobody decided to go back up. However, when we reached the bridge that was the ten-minute mark and looked up to where we came from, this was not an option. Alea iacta est, the dice have been cast as is supposed to have said Ceasar said, crossing the Rubicon. We were past the point of no return.

8 km ahead and 700 meters down was our destination, the sea. 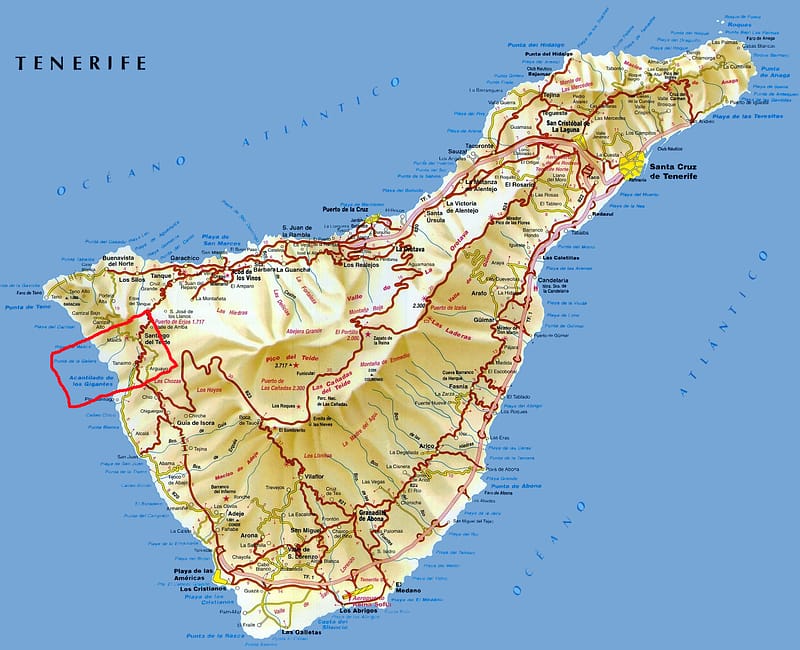 The Sea Is 4 Hours Down The Track

We had been warned that it might be a tough descent but we were full of confidence as we set off. After all 7 km, all of it downhill, how hard can that be?

And we were right, the hike was relatively easy provided you have the right foorwear and bring plenty of water to drink.

The winding path takes you through a very special terrain. You walk in dried out riverbeds, you climb barren rock, cross small streams and slide down the side of big boulders. There are even a great variety of plants and trees. Fortunately Andrea knew them all by name and thus added another attraction to the trek.

The sea is a welcomed sight as we end the journey and get ready to enter the boat that will take us back to Los Gigantes.

We were warm and tired though not exhausted – the trip had been a exciting and spectacular one and it marked the hifhlight of our days in Los Gigantes. Thank you Andrea and thank You Sun Holidays.

The trek was over but it has to be admitted that it took us two whole days to get our legs to function properly again. It was not until the third day that the would carry us without to much protest.

Be warned: It ain’t over till you get your legs back!

There are plenty of videos on youtube that shows the beauty and grandeur of this trek.

Here is an example, enjoy: