Monterey is one of the more beautiful coastal cities of California. It was originally the state capital of California, and has many historic buildings in its downtown. Today it is best known for its beautiful coastline, its world-class aquarium and from the many John Steinbeck novels set there, including Cannery Row (which has given its name to the main touristarea) and Tortilla Flat.

The ragged Pacific coastline and the strong sea-currents made much of the California coast virtually unexplorable to European ships.

After a disastrous attempt to explore this new territory by sea, Spanish missionaries in Mexico launched a series of overland expeditions from San Diego.

Monterey was established in 1770 by Father Junipero Serra and soon became a Spanish military base with a small fort or “presidio” located near a calm harbor that could provide shelter to supply ships.

The military presence eventually gave way to a thriving commercial trade that brought in many enterprising foreign merchants.

Once Mexico gained its independence from Spain, Monterey became the capital of Alta California under Mexican rule.

Lands once owned by the government began to come into private hands, and local families began to consolidate their property and power into business enterprises based on the ranches or “ranchos,” where they raised cattle or invented the famous Monterey Jack cheese.

Monterey soon fell under American power in the Mexican-American War and remained the capital of the territory. A delegation of writers drafted the constitution which marked the entrance of the State of California into the United States of America. This era saw the mass northward migration of ambitious people in search of gold, which led to a near desertion of the town.

The canning-industry made its mark on the city, but are now a thing of the past, leaving the so-called “Cannery Row” as its main touristtrap, with a surplus of shops and restaurants.

Monterey is today known for its magnificent natural beauty, the world famous Aquarium, and the temperate year-round climate.

The abundance of marine wildlife, visible from the shoreline is one of the primary attractions of the region. Seals, sea lions, and sea otters are visible year-round, and migrating whales are commonly seen in the fall and spring months. 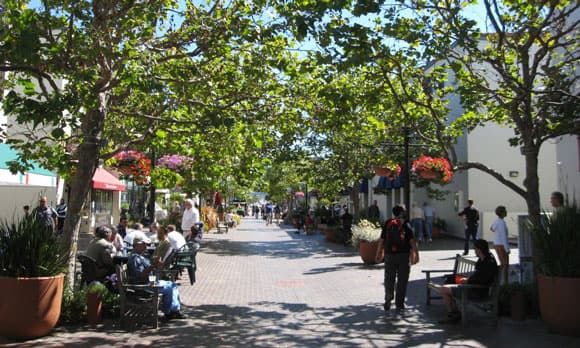 Alvarado Street serves as downtown Monterey’s “main drag.” It has superb restaurants, a selection of bars, and unique shops.

Monterey’s Cannery Row is where all the canning facilities were located in the old days. Today it is a vast recreational area with restaurants, bars shops etc. Visitors flock here in the thousands, making it a very busy and somewhat crowded place.

The Cannery Row is well worth a visit, but preferably a short one. (visit Cannery Row’s website here)

At the far end of Cannery Row you will find The Bay Aquarium and this really is a must when you are in the area!

The newest and most impressing exhibition are definetly the huge tanks with Jellyfish. The colors and the slow graceful movements are amazing.