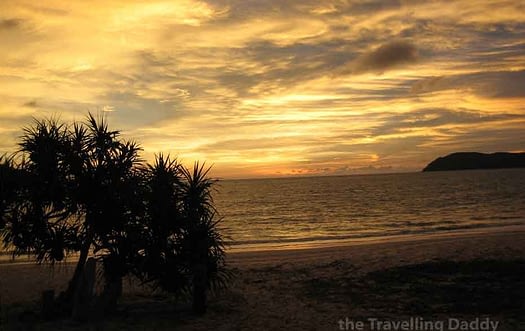 The Langkawi Island is situated off the coast in the very north of Malaysia, close to the border with Thailand. It has not yet reached the top of the Asian holiday-destinations but tourism is beginning to take its toll.

This can be clearly seen in the capital, Kuah, where the high-rises and the shopping-malls are popping up all around. But there is still a sense of tranquility about the island that you don’t find in the more touristy places like in, say Thailand. The name Langkawi derives from ancient Malaysian meaning “Strong Eagle” and the eagle is also the Islands symbol. You’ll see a huge version (very “plastically”) of it as you arrive at the Kuah jetty. The boat ride from Georgetown on the more famous Penang Island is about 2 hours in a very comfortable ferry. You can also get there from the mainland in about an hour. Langkawi also has its own airport with several daily flights to and from both Kuala Lumpur and Singapore. The Islands history as a tourist destination is not long; it all started back 1990 when Prime Minister Tun Dr Mahathir Mohamad set out to transform Langkawi. The air is clean and crisp. The sun low in the horizon and the calmness of the sea sets a crystal-like mood.  Even the seagulls are quiet. With the shining sea, the high sky and an horizon that never ends, this truly is one of nature’s great cathedrals.

Langkawi – what a strange name:

The name Langkawi (Lang- ka-wi) combines the old Malay words “helang” which means eagle and “kawi” which means strong. Classical Malay literature also claims that the island is to be one of the resting places for the mythological bird “The Garuda” that became Vishnu’s famous vehicle

The whole island is steeped in legends and the favorite story is of Mahsuri, a maiden who was wrongfully accused of infidelity. Before allowing herself to be executed, she put a curse on the island for 7 generations. As a proof of her innocence, white blood flowed from her veins, turning the sands on Langkawi’s beaches white. (Her mausoleum can be seen near Kuah)

Another legend concerns the naming of places on and around Langkawi Island. Pulau Langkawi’s two most powerful families became involved in a bitter argument over a marriage-proposal. A fight broke out and all the kitchen utensils were used as missiles. The Kuah was spilt on Kuah and seeped into the ground at Kisap, which means to seep. A pot landed at Belanga Perak (broken pot) and finally the saucepan of air panas (hot water) came to land where Air Hangat village is today. The fathers of these two families got their comeuppance for causing all this mayhem – they are now Langkawi’s two major mountain peaks.