The origin of the city is obscured by legends, the most famous one is about a Slavic tribe leader named Kyi, who, together with his brothers Shchek and Khoryv and his sister Lybid founded the city. According to this legend the name Kiev or Kyiv means: “Belonging to Kyi” 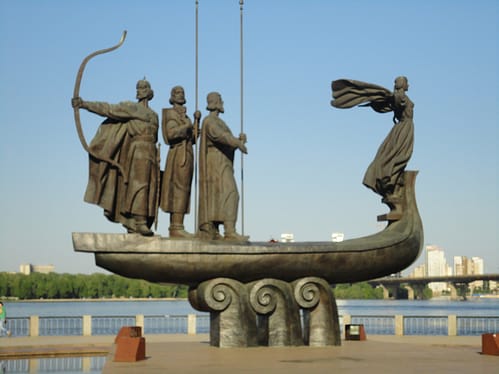 The city was ruled by the Vikings or Khazans and is often referred to as Kievan Rus.

In 1240 the Mongols invaded and under the leadership of Batu Khan destroyed Kiev completely.

The city has been under the rule of a large variety of conqerors, from the Grand Duke of Lithuania to the Tartans, the Poles and from 1667 became a semi-autonomous part of the the Tsardom of Russia.

In the early part of the 20th century Kiev did, due to its location, was at the center of various powers. From early 1918 to august 1920 Kiev changed hands 16 times. From Russia to Poland to Germany and so forth. It was even for a short period the capital of an independent Ukraine.

Both Kiev and the Ukraine suffered a lot during the Soviet era. The forced collectivization of the Ukrainian farms and the subsequent deportation and murder of independent farmers cost the lives of hundreds of thousands during and after the great famine. Stalin, who had no respect for human lives, used killing and starvation as a means to imply the industrialization of the country. The Great Famine of 1932 – 33 together with the Great Terror of 1937 – 38 killed close to 4 million and almost eliminated the country’s intelligentsia

In World War II, the city again suffered significant damage, and was occupied by Nazi Germany from 19 September 1941 to 6 November 1943. More than 600,000 Soviet soldiers were killed or captured in the great encirclement battle of Kiev in 1941. Most of them never returned alive. Shortly after the city was occupied, a team of NKVD officers that had remained hidden dynamited most of the buildings on the Khreshchatyk, the main street of the city, most of whose buildings were being used by German military and civil authorities; the buildings burned for days and 25,000 people were left homeless.

Allegedly in response to the actions of the NKVD, the Germans rounded up all the local Jews they could find, nearly 34,000, and massacred them at Babi Yar over the course of 29–30 September 1941.

Kiev recovered economically in the post-war years, becoming once again the third most important city of the Soviet Union. The catastrophic accident at the Chernobyl Nuclear Power Plant in 1986 occurred only 100 km (62 mi) north of the city. However, the prevailing northward winds blew most of the radioactive debris away from the city.

In the wake of the collapse of the Soviet Union the Declaration of Independence of Ukraine was proclaimed in the city by the Ukrainian parliament on 24 August 1991. Kiev is the capital of independent Ukraine. Later, in 2004–2005 the city played host to the largest public demonstrations in support of the Orange Revolution.

For a short while the Ukraine was governed by a democratically elected president, Victor Yushchenko and his Prime Minister Julija Tymosjenko, but today the President is Viktor Janukovytsj who is by many seen as the lapdog of Vladimir Putin and the Russians.

Yushchenko has vanished into oblivion and Tymosjenko is in prison on trumped-up charges.

It is the hope of the young ukrainians that Tymosjenko will survive the prison-term and make a comeback into Ukranian politics as she seeems to be the only one willing or able to stand up against Russian influence.