The Croatian Island of Hvar is located a short boat trip from Split and is an island of great beauty.

It is not very large, just approximately 68 km long, with a high east-west ridge. Hvar is different from many of the other islands in the area, in that it has a large coastal plain, ideal for agriculture, and for its freshwater springs. The hillsides are covered in pine forests, with vineyards, olive groves, fruit orchards and lavender fields. It has mild winters and warm summers with many hours of sunshine.

Hvar is home to some 12.000 people which makes it the 4th most populated of all Croatia’s islands.

The plains surrounding Stari Grad is a cultural landscape that has remained almost unchanged since it was first colonized by Greeks from Paros in the 4th century BC and up to our time.  It has mostly been used for growing grapes and olives. The site is also a natural reserve. The landscape features ancient stone walls and trims, or small stone shelters, and bears testimony to the ancient geometrical system of land division used by the ancient Greeks, and has remained virtually intact over 24 centuries.

The Greeks called the island Pharos and there are remnants of their buildings to be found all through Stari Grad. The ruins of the defensive city-walls can be seen next to the church of St John. Much of the town’s houses have been built on top of the Greek ruins. Thus, the house we lived in had a first floor with walls more than 2.000 years old.

We are fortunate enough to have Croatian friends who let us borrow their StariGrad summerhouse for a week. It was located close to the villa of the great Croatian poet Petar Hektorović,

Hektorović  was born in StariGrad in 1487 and is one of Croatia’s most favored poets. Even though he wrote most of his work Italian and Latin (Hvar was a part of the Venetian republic at the time) his main work “Fishing and Fishermen”( Titled Ribanje i ribarsko prigovaranje in Croat) is written in his native tongue. His house is now a museum. 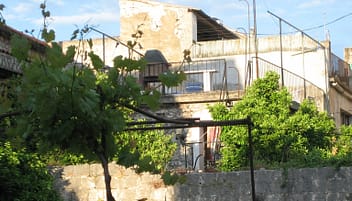 The roof terrace was a great place for afternoon peace

StariGrad can be very hot in the summer but the thick stone walls of the hose kept it remarkably cool and we also had the use of a roof terrace were we could enjoy the sunset (Croatia was to show us a lot of spectacular sunsets).

We came to Hvar in mid may, the weather was plesant and the major lot of tourists had not yet arrived. Largely we had the place too ourselves.

Dinner the first night were at the Conocobia Pharia situateed just 10 metres from where we lived. The food was ok and the sevice was excellent. The young waitress, who was also the landlords daughter took time to tell us of things to do on Hvar. So, tomorrow we’ll be going on a spectacular drive to the small village of Zavala.

It turned out that hiring a car here can be soemthing of a challenge unless you book well in advance with one of the major rental companies and have the car delivered. After a while, though and with the kind assistance of my latest friend, Antun at the tourist-office we were equipped with a shaky specimen of VW Golf and set off.

First of all, the trip is not for the claustrophobics. You have to go throug a singel lane, 1.4 km long tunnel. There are no lights and you never know when or where there is a car coming in the other direction. But once you get through it you find a nice, small seaside village, a small private beach and a nice little café. But the main attraction is definately the tunnel, once you’ve driven through it, you’re not likely to ever forget it.