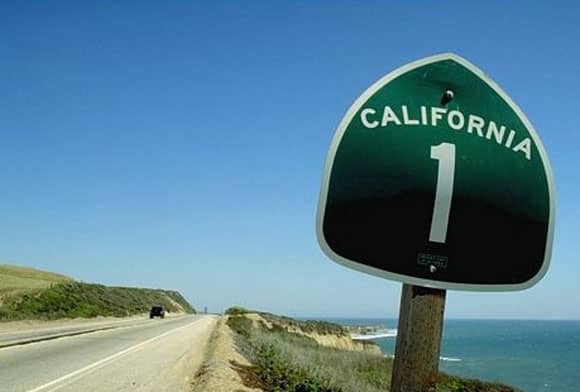 The US Coastal Highway runs from San Francisco to Los Angeles, but it is the part between Carmel and San Luis Obispo that is the real treat.  The road follows the ragged coastline and the views are spectacular, there are lots of parkingspots and it offers a lot of photo oportunities.

The road is famous for its scenic beauty, and rightly so. The views are spectacular, when driving from the north to the south you will also see it bathing in sunlight. That is the reason why it is highly recommended to go in that direction.

Once you stop the car and get out you get that rare sense of untouched nature,, there is just you, the sea, the hills and the wind.

There is one thing to keep in mind when driving Highway One; Gas stations are few and far between! So be ready to fill up any time you see one.

A major vantage point on the Coastal Highway is the “Nepenthe” café and restaurant. Situated high above the sea, it offers a stunning view of the Pacicfic. As one of the few places to eat along the drive it is well worth to stop for a bite. Check out the website here

After stopping at the “Nepenthe” our next stop was the beach called Piedras Blanca, crowded with elephant seals.

We had decided to skip Hearst Castle, which is right outside San Luis Obispo, because display of wealth in such a manner always tend to make me queasy. Instead we decided to check out another place we had heard of;  “The poor Mans Hears Castle” or “Nittwitt Ridge” just a few miles further south, in Cambria. This is a most peculiar place, buildt out of garbage by an eccentric californian.

The next stage took us to the city of San Luis Obispo and to a quick stop at what must be the number one symbol of “Kitsch” architecture; ” The Madonna Inn”

Finally, after a long day on the road we reached the “Danish” town of Solvang. We arrived late, checked in at the Kronborg Inn – which was an excellent choice, both nice and clean, friendly staff and comfortable a room.

What was not so great about Solvang was the lack of decent restaurants, it could possibly be that we were a little too late, but the number of open restaurants was quite limited. The receptionist recomended that we try a place called “Root 246” which was within walking distance, but that turned out to be crowded, not a single chair available. Evidently that was the only decent restaurant in town because all the others were deserted. We ended up eating in what was supposed to a chinese restaurant and though it was cheap, it was not good value for money.

Hopefully, Solvang will show us a better side of itself in the morning!

Tomorrow we shall be going through the Santa Ynez valley, Los Olivos and end up in Santa Barbara