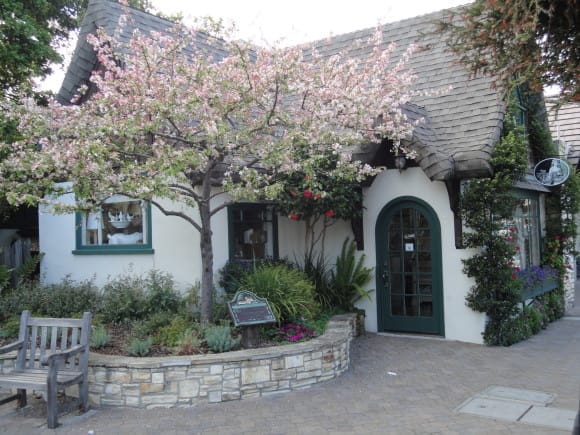 The charming town of Carmel is perhaps most famous for having actor and director Clint Eastwood as mayor from 1986 to 1988, but this charming little town has a lot more going for it than that.

Founded in 1902, it is situated on the Monterey Peninsula and is known both for its natural scenery and rich artistic history.

In 1910 it was reported that 60 percent of Carmel’s houses were built by citizens who were “devoting their lives to work connected to the aesthetic arts.”

Carmel-by-the-Sea is an exceptionally dog-friendly city. Most hotels allow dogs to stay with guests. Almost all restaurants that offer outside dining allow dogs in those areas, with most of them also offering water. A few have special “doggie menus.” Many retailers allow dogs to accompany their owners in their stores and many have treats available. Water bowls and dog biscuits can also be found in front of many stores. Dogs must be leashed, except on Carmel City Beach, where they are allowed unleashed if they are under voice command from their owners. The police department takes animal welfare seriously and officers will open cars that contain pets without adequate ventilation or water and will remove the pets and cite the owner.

Another thing that the town is famous for are the unusual laws:

Though often mistakenly thought of as an urban myth, the municipal code bans wearing shoes having heels more than 2 inches in height or with a base of less than one square inch unless the wearer has obtained a permit for them. While the local police do not cite those in violation of the ordinance, this seemingly peculiar law was authored by the city attorney in the 1920s to defend the city from lawsuits resulting from wearers of high-heeled shoes tripping over irregular pavement distorted by tree roots. Permits are available without charge at City Hall.

Another unusual law, prohibiting selling and eating ice cream on public streets, was a focus point of Clint Eastwood’s campaign for mayor in 1986. He, and the new council elected along with him, overturned the ordinance and other similar laws that they considered to be too restrictive of businesses.

Every tree is sacred

The town has historically pursued a vigorous strategy of planned development to enhance its natural coastal beauty and to retain its character, which the city’s general plan describes as “a village in a forest overlooking a white sand beach”. In1925 the town adopted a clear vision of its future as “primarily, essentially and predominantly a residential community” The city thus sets a standard for the world on how to retain authenticity in today’s increasingly homogeneous world.

A lot of effort is put into the conservation of the town’s original beauty and it is for instance, absolutely forbidden to cut down or even to harm a tree. As a result the whole town is full of beautiful old trees.

New buildings must be built around existing trees and new trees are required on lots that are deemed to have an inadequate number.

It’s a sort of fairytale place

The village has no street lights or parking meters. In addition, the businesses, cottages and houses have no street numbers. (Originally, the early artists who were the first builders of the homes in the town, named their houses, rather than having numerical addresses.) Due to this situation, the Postal Service provides no delivery of mail to individual addresses. Instead, residents go to the centrally located post office to receive their mail. Overnight delivery services do deliver to what are called geographical addresses, such as “NE Ocean and Lincoln” (Harrison Memorial Library) or “Monte Verde 4SW of 8th” (Golden Bough Playhouse). The format used for geographical addressing lists the street, cross street, and the number of houses from the intersection. For example, in the case of “Monte Verde 4SW of 8th”, the address translates to a building on the West side Monte Verde Street four properties south of the 8th Ave intersection.

Eating and sleeping in Carmel:

Accomodations in Carmel are plentiful but rather on the expensive side. We were recommended Clint Eastwoods; Mission Ranch but found it to be too costly for our needs.  Thus we were pleased to find the Best Western TownHouse Lodge. They supplied us with a nice, clean room, a comfortable bed and an ample breakfast. (though breakfasts in the US and in Norway are two quite different things). It is located in the very center of Carmel (One block away from Ocean Ave.) and within walking distance from everything.The staff was both pleasant and helpful.  Highly recommended!

As for dining in Carmel; we chose “The Grill“ on Ocean Ave. between Dolores and Lincoln and what a good choice that was, great food, great wine and competent staff. It actually turned out to be the best meal we had in our three weeks in the US.