Often referred to as “The Rock“, the small island was originally used for a lighthouse, then a military fortification, then a military prison (1868), and then as a federal prison from 1933 until 1963.

Then, in the beginning of November 1969, the island was occupied for more than 19 months by a group of Native Americans from the San Francisco area as a part of the wave of Native activism that swept across the nation as a public protests through the 1970s.

In 1972, Alcatraz became a national recreation area and received designation as a National Historic Landmark in 1986.

Today, the island is managed by the National Park Service as a part of the Golden Gate National Recreation Area; it is open to tours. Visitors can reach the island by ferry ride from Pier 33, near Fisherman’s Wharf.

Historically, the Native Americans kept well away from the Island, calling it the “Evil Island” and believing it to be cursed.

The Spaniards called it “La Isla de los Alcatraces,” which means “The Island of the Pelicans”, from the old Spanish word “alcatraz” meaning pelican. The origin is, however from Arabic “al-qatras” which means albatross. Today, though, there are no pelicans (or albatross) on Alcatraz despite the name.

In 1963, the buildings had decayed into a state beyond repair, that, together with the high cost of running the penitentiary led Attorney General, Robert Kennedy to order it closed. 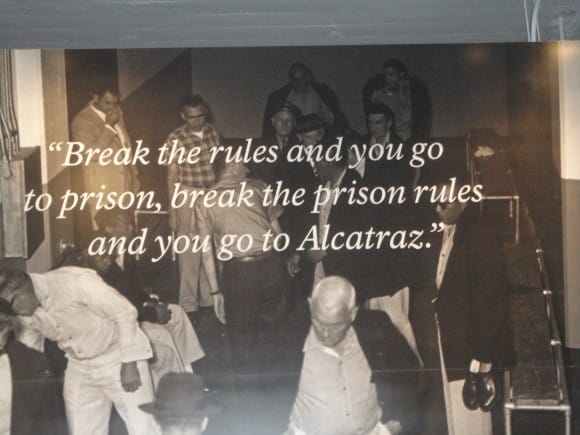 During its time as a prison, Alcatraz was home to famous criminals like Al Capone, George “Machine Gun” Kelly and Robert Franklin Stroud, the Birdman of Alcatraz.

Alcatraz Island was occupied by Native American activists for the first time on March 8, 1964. Beginning on November 20, 1969, a group of Native Americans called United Indians of All Tribes, mostly college students from San Francisco, occupied the island to protest federal policies related to American Indians. They hoped to give Indians new opportunities in the cities, as many Indian reservations were isolated from job markets.

The occupiers, who stayed on the island for nearly two years, demanded the island’s facilities be adapted and new structures built for an Indian education center, ecology center and cultural center. The American Indians claimed the island by provisions of the Treaty of Fort Laramie (1868)between the U.S. and the Sioux; they said the treaty promised to return all retired, abandoned or out-of-use federal lands to the Native peoples from whom it was acquired. (Note: The Treaty of 1868 stated that all abandoned or unused federal land adjacent to the Great Sioux Reservation could be reclaimed by descendants of the Sioux Nation.) Indians of All Tribes then claimed Alcatraz Island by the “Right of Discovery”, as indigenous peoples knew it thousands of years before any Europeans had come to North America.

The Native Americans demanded reparation for the many treaties broken by the US government and for the lands which were taken from so many tribes arguing that indigenous peoples knew about Alcatraz at least 10,000 years before any European knew about any part of North America.

During the occupation, President Richard Nixon established a new policy of self-determination, in part as a result of the publicity and awareness created by the occupation. The occupation ended on June 11, 1971.

Following a succession of demands at Alcatraz, the U.S. government returned excess, unused land to the Taos, Yakama, Navajo and Washoe tribes.

In 2011 a permanent multimedia exhibit was opened on Alcatraz examining the 19-month occupation. Located in the former band practice room in a cellblock in the basement, the space serves as the cultural center the Native American occupiers requested upon their occupation. The exhibit, called “We Are Still Here,” was however not open to the public when we visited the island.

It has been said that no one ever succeeded in escaping from Alcatraz, partly because the water of the bay is too cold and the currents are too strong. This is only a myth, every year 100 members of San Francisco swim Club swims across the bay fro Alcatraz to the mainland.

Today Alcatraz is just one more sightseeing tour you are obliged to take when visiting San Francisco. Though it is a part in history, it’s glory days are way behind it. Having said all that; no trip to San Francisco would be complete without it.