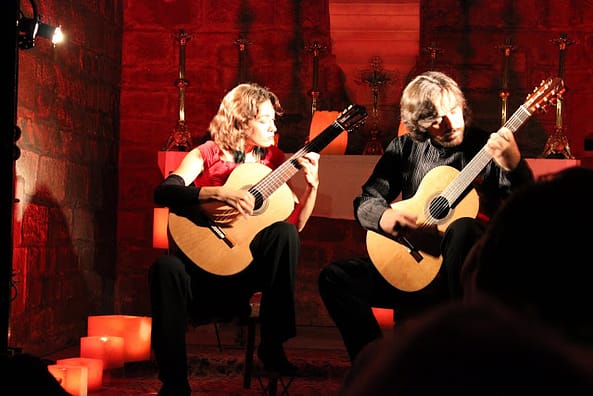 Let it be said at once; a more intense and vivid experience of Catalonia and Spain is not to be found anywhere!

This intimate concerto took place in an old church inside the monastery Santa Anna in Barcelona.

In the modest church room there was room for just a few people. The atmosphere was heavy and dark, almost sacral. Here was the impression of candlelight combined with the simple and effectual sceneography.

It was the perfect setting for an evening of Spanish guitarmusic. The music grips you from the first chords and did not let go until the last tones rose to the ceiling.

The program contained the ultimate of Spanish guitar traditions. From Fernando Sor through Isaac Albeniz, Pablo de Sarasate and Enrique Granados till it ended in the evenings cresceno; Aragon, Toreador, Gypsy dance and Habanera from Bizet’s Carmen.

We were presented with a virtuosity and technique that was stunning, two equilibrists that pushed the limits of a guitars possibilities. The technical perfection was however, overshadowed by the sheer intensity of the music. Catalonias and Spains famous intensity and sensuality was there in every note and chord.

A duo consists of two….

He was the leading player, she accompanied him, building up under his solos and creating a formidable sound. The old, near-extinct male chauvinist in me nodded; yes the guitar is a man’s instrument.

As they reached Bizet’s “Carmen”, the roles changed. Now she was in the lead and he accompanied.

That fingers can move with such speed and precision seems almost impossible. It all seemed so effortless and with such intensity and sensuality that it is beyond any description. She even managed to include small elements of humor in her interpretation of Bizet’s masterpiece.

It is said that the guitarlegend Andres Segovia once said about John Williams that “God has put a finger on his bow”. The same Lord must surely have offered a finger or two to Barcelona Duo de Guitarra too.

It was amazing to see what two sets of hands can achieve with two  time six strings. Not to mention, as the encore showed, what four hands can do playing one guitar together.

After the concert the artists met with the audience, mingled, chatted and signed cd’s. A delicious Spanish wine was served and the evening faded into a warm Spanis summers night.

Tourists travel to new places, wander around experiencing what the place has to offer; shops, markets, people, all the time with a sense of standing outside looking in. Thanks to the Barcelona Duo de Guitarra, we were given an opportunity to come inside, to take part in what it is to be Spanish, to simply be Spanish for a short while.[learn_more caption=”Barcelona Duo de Guitaara” state=”open”] The Duo consists of Ksenia Axelroud and Joan Benejam. Ksenia Axelroud was born and grew up in Vladivostok, Russia. She travelled at a young age to Barcelona to study the guitar. Jaon Benejam grew up on the Spanish island of Mallorca. They met as students at the “Conservatorio Superior O. Esplà” in Alicante, Spain, where they both today hold a professorate Superior de Guitarra Diploma with the highest qualifications. As a duo, they work with professor Manual Barrueco at Johs Hopkins University in Baltimore, USA. They have toured both in Europe, North and South America and in Russia. They have given concerts for Catalonia’s National radio station, COM radio, Radio Orfeo in Moscow, Russian Channel Cultura and Spanish TV3 who devoted an entire program to the duo’s careers. [/learn_more]